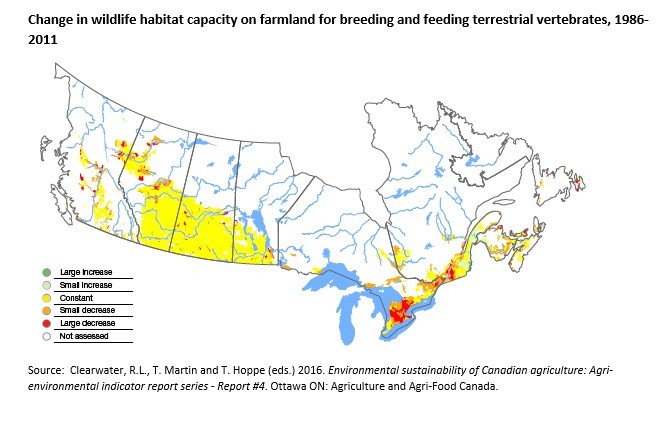 The Canadian Field Print Initiative (CFPI) recently held a Biodiversity Indicator Workshop in Ottawa. This workshop brought together scientists and modellers based in NGOs, governments and sustainability initiatives. An expert opinion process was followed to develop consensus on an optimal approach to developing a CFPI biodiversity indicator for Canadian crop production.

As a result, it is relatively difficult to devise meaningful measures of biodiversity when compared to other sustainability indicators applied to crop production (such as soil loss, greenhouse gas emissions).

At the November CFPI workshop, much of the discussion focused on Agriculture and Agri-Food Canada’s Wildlife Habitat Capacity on Farmland (WHCF) Indicator. Already developed to reflect biodiversity trends in the context of Canada’s farmland, the WHCF Indicator embodies data and modelling with strong potential to provide the basis of CFPI biodiversity indicators, at both field level and macro level.